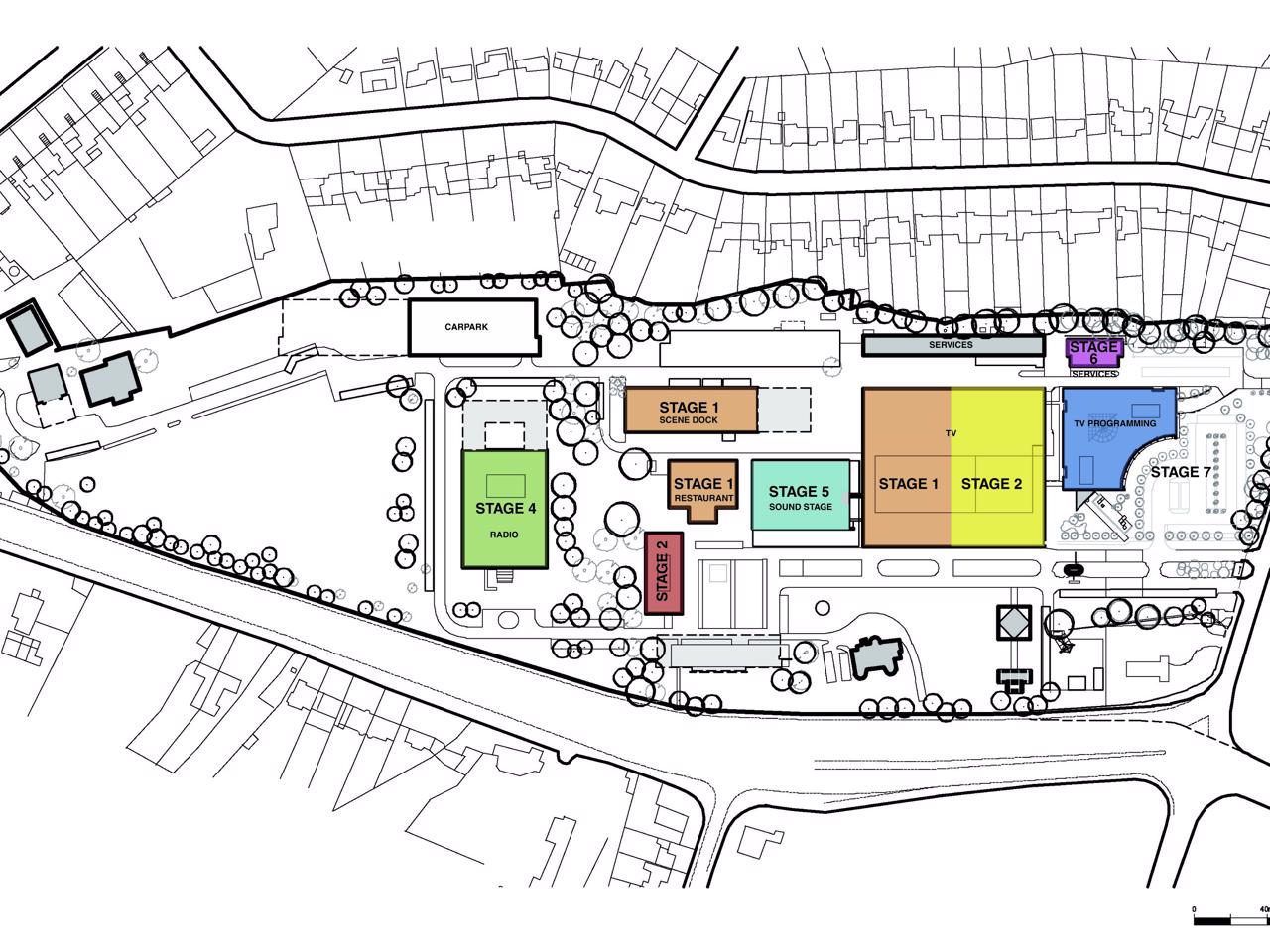 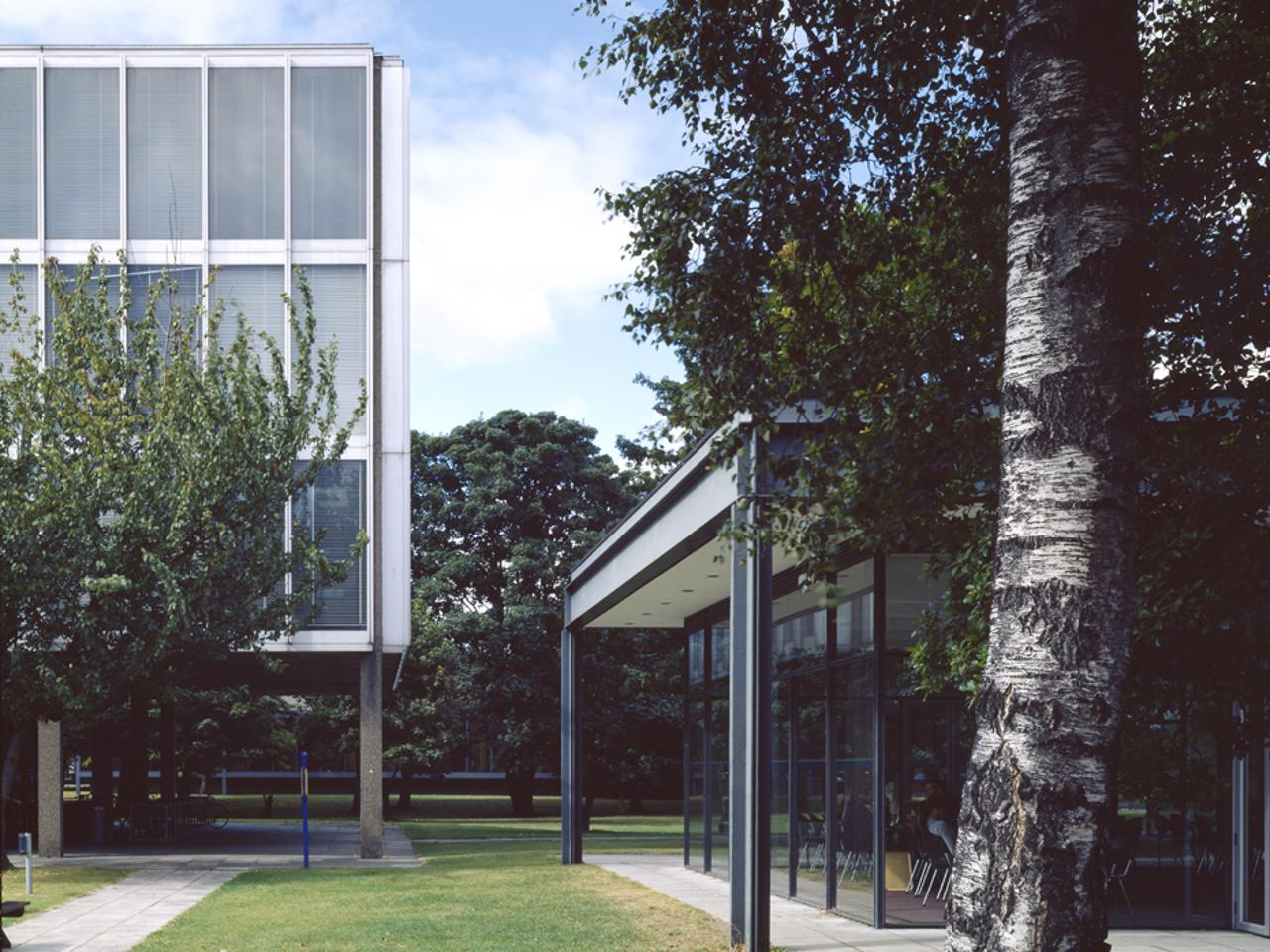 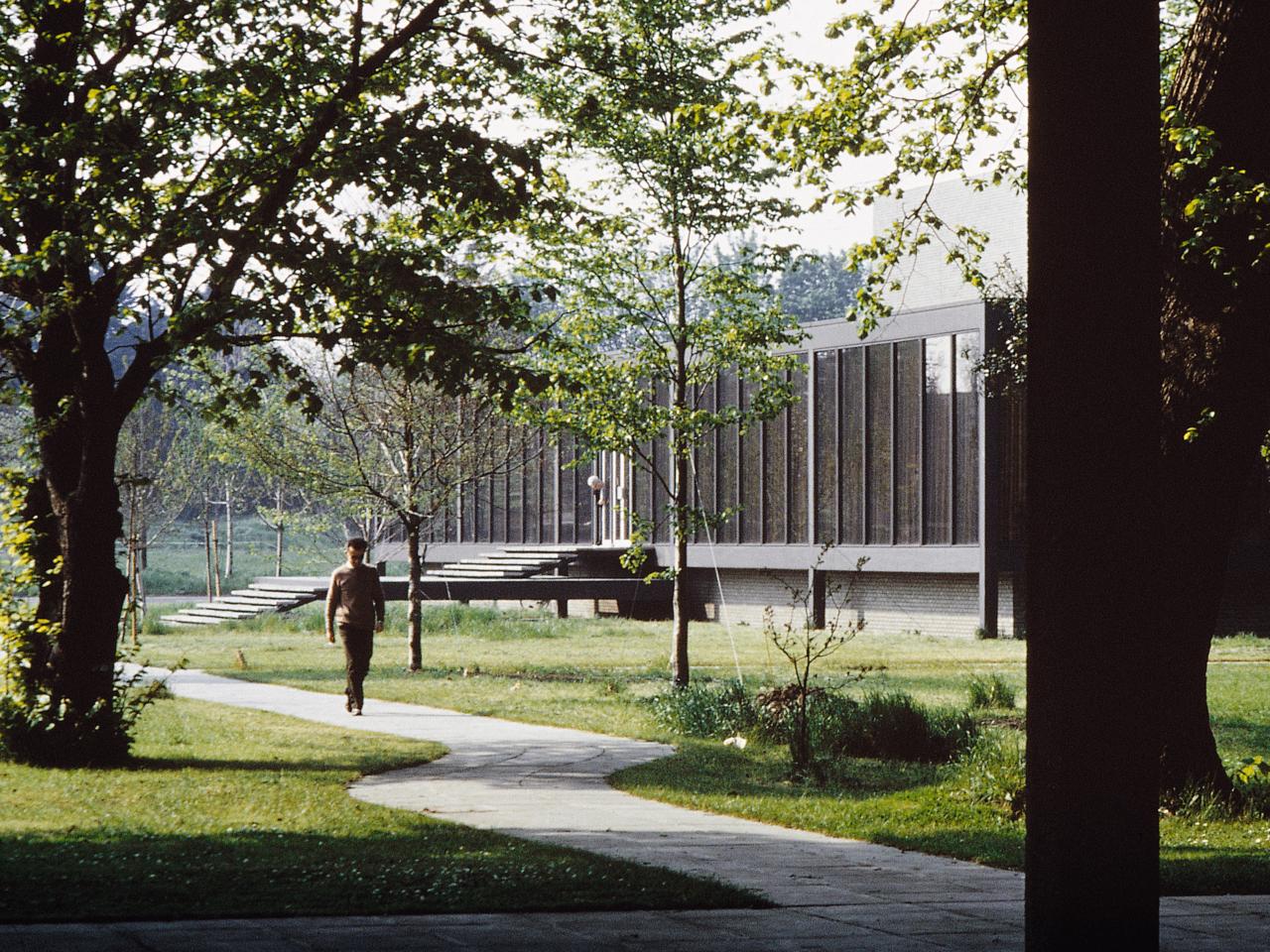 The RTÉ studios at Donnybrook in Dublin were masterplanned by Ronald Tallon in 1960. The initial brief was just for a Television building but by 1963 the young RTÉ company was so successful that a new master plan was prepared as a campus layout to allow different disciplines expand independently and at different rates. RTE continued to expand, further land was purchased and a further master plan was made in 1974. RTÉ held to the original architectural discipline, resulting in a unity of expression to all buildings on the site. Further buildings were added in the 1980s and the 1990s.

Perhaps the greatest problem for the architect working over forty years on one site, with an organization continuously undergoing change, is maintaining an architectural discipline and order while meeting the changing needs of technology and function. This requires that the architect relate the separate buildings to each other in scale and architectural expression. In order to achieve this, all the buildings on the site were related to a master grid, a 20ft (6.1m) square grid. Buildings are spaced or lapped in units on this grid, and all roads, footpaths and car parks relate to it. The structure of each building is in units of 20ft (6.1m) or multiples of same. The Administration building has a 20ft (6.1m) square flat-slab structure; the Restaurant building has a 40ft (12.2m) square steel structure; and the Scene-dock building has an 80ft (24.4m) square two-way spanning steel frame. The design requirement that every building should be capable of expansion in such a manner that the building would read as an architectural entity at every stage of its growth required the external wall of the buildings to be demountable.

The architecture on the RTÉ campus expresses the continuity of design philosophy practiced by Scott Tallon Walker over a period of forty years.

The buildings are further unified visually by the principle of recessing the ground-floor areas of all buildings, providing an obvious way of entering, while exposing the clarity of the structure. This recessing of the ground-floor space helps to link the exterior spaces to the interior spaces in a free-flowing transition. The human scale is maintained, and the mass of the building is never allowed to dominate the people who use them. Buildings overlap, making a continuity of scale and spaces related to each other.

The suburban site, with its Georgian house, was laid out as parkland with wooded boundaries. The initial brief was for a Television building capable of producing ten hours of live programmes, and 25 hours of pre-recorded programmes.

The original concept envisaged a single building expanding in two directions in a concertina form. The success of the young RTÉ company led to the production of many more hours of live programming from the studios than was originally thought possible. The original master-plan idea – with Television expanding to one side and Radio planned to grow on the opposite side – had to be abandoned, and in 1963 a new master plan was prepared as a campus layout to allow different disciplines expand independently and at different rates. The original Television building was allowed to expand as planned, but separate buildings were planned for Administration, Scene-dock manufacturing, Restaurant and Radio.

RTÉ continued to expand, and by the early 1970s the number of people employed had grown from 200 to 1,000. Additional lands were purchased, including St Andrew’s playing fields and Mount Errol house. A further master plan was made in 1974 to include two additional office-type buildings for producers and programmers. These were designed as identical buildings to the existing Administration building, with all three office-type buildings linked at lower-ground floor by a Library and Archives to house broadcast material originated at the studios. The new master plan showed how the original Television building would expand, and the new Radio building could also grow as required. The three linked office buildings would have provided a natural link for all departments back to the main studio complex, and the architectural discipline of the campus could have been maintained.

At this stage, the original Television building had doubled in size, the multi-cellular Scene-dock had expanded by another cell, and the Radio building was built. RTÉ held to the original architectural discipline, resulting in a unity of expression to all buildings on the site.

Further changes occurred in the 1980s, and a Sound Studio building was built, which was not in accordance with the master plan. The placing of this building between the original Television building and the Administration building meant that the proposed series of three identical office buildings linked with the Library and Archives could not be realised. Instead a new location was proposed for the new TV Programming building between the Television building and the Nutley Road entrance. Further buildings were added to the campus in the 1990s with a new Services building in 1995, and the new TV Programming building in 1999, with direct linkage to the studio complex by way of a bridge at first-floor level.